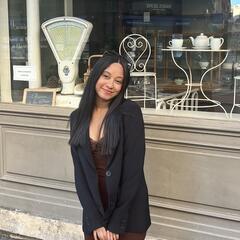 Isaidy Medina is a sophomore in Silliman College planning to double major in English and History. She is from New York City and participated in the Freedom and Citizenship program at Columbia. At Yale, she volunteers with the Elm City Echo, a student-run literary magazine, and works at the Yale Center for British Art. She has a strong interest in political philosophy and enjoys watching her favorite show “New Girl” in her free time. 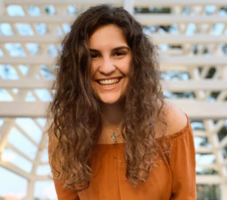 Hannah, Benjamin Franklin College (’25), is a rising sophomore studying Philosophy and Political Science. During the academic year, she enjoys debating with the Independent Party and working at the Yale Law Library. She is also passionate about education and the environment—two topics she would love to discuss with you! In her free time she enjoys reading, running, and volunteering. She is super excited to meet the incoming CTW class! 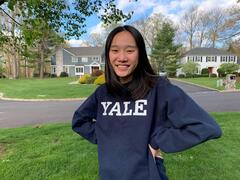 Grace, Branford College (’24), is double majoring in Humanities, with a focus on political theory, and Computer Science. At Yale, she is a Writing Partner and an Undergraduate Learning Assistant for a core CS course. She also serves as the Director of Delegations for Yale Model Congress and hosts discussions with a political theory reading group. Usually, you can find her reading, making yet another Spotify playlist, or solving the NYT Mini crossword. 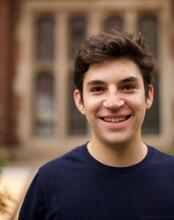 Yosef, Morse College (‘24), is majoring in Humanities with a focus on political thought  and history. He is originally from Maryland. At Yale, he is an editor and writer for The New Journal, works with the Yale Undergraduate Prison Project, and serves on the board of the Slifka Center for Jewish Life. He is excited to get to know all of the CTW students! 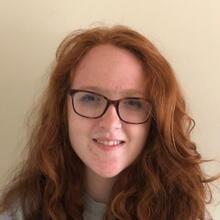 Katie, Timothy Dwight College (‘23) is a rising senior double-majoring in Classics and Religious Studies. She is originally from Stow, Massachusetts and loves studying languages. She is particularly interested in the late antique world and is excited to begin her senior thesis next semester on the reception of Latin lyric in early Christian hymnody. Outside of class, some of the things Katie enjoys most include serving as an Undergraduate Learning Assistant (ULA) at Yale and New Haven REACH peer mentor, playing trombone with the Davenport Pops Orchestra, drinking coffee, and solving crossword puzzles. 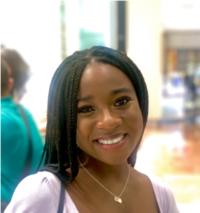 Aisha, Jonathan Edwards College (‘22), is a rising senior studying Political Science and Education Studies. She is originally from Nigeria but grew up in Brooklyn, New York. She is interested in education policy and school integration. She is a Sagittarius and in her free time, she loves to practice colorful makeup looks, watch Parks and Recreation, and try new foods. 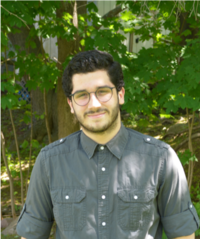 Sebastian, Davenport College (‘22+1), is majoring in Philosophy. At Yale, he sings a cappella with The Whiffenpoofs and is the Lead Recruitment Coordinator of the Undergraduate Admissions Office. During his free time, he enjoys listening to podcasts, watching slam poetry, and planning a bike trip that will take him from his home-state of Massachusetts to Florida. Currently, he is interning at Families First, a nonprofit organization that provides parenting education across the Greater Boston area. He is super excited for the CTW program and to get to know the students! 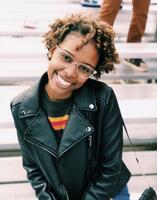 Zaporah, Ezra Stiles College (‘23), is majoring in English. During
the academic year, she works as a Recruitment Coordinator for the Undergraduate Admissions Office and writes for the Yale Daily News. In her free time she loves to journal, binge Netflix shows, and color code her G-Cal. 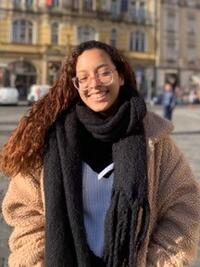 Mery, Pierson College (‘20), is majoring in Ethnicity, Race, and Migration with a focus on racial equity and social justice. During the academic year, she works as a Finance Manager for the Undergraduate Organizations Funding Committee and volunteers as an instructor for Splash at Yale as well as with the student-run nonprofit Havenly. In her free time, she loves to read poetry, write, and watch Netflix documentaries. She is currently interning as at Summer Fellow with the Yale Prison Education Initiative at Dwight Hall where she works with incarcerated students enrolled in Yale accredited summer courses. 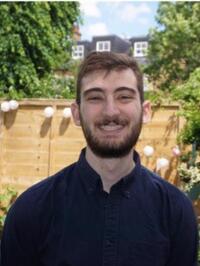 Seth, Branford College (‘20), is majoring in English with a focus in 17th century poetry. He grew up in New York City and attended Poly Prep in Brooklyn and the School for Ethics and Global Leadership in Washington, D.C. At Yale he is the director of Red Hot Poker (sketch comedy), president of Soapbox Oratory (public speaking) and a mentor for the Yale Undergraduate Prison Project. He also works as a tour guide for the Yale Admissions Office. He is incredibly excited for this summer with CTW! 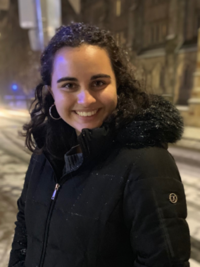 Maya Pasic (2019)
Maya, Branford College (‘21), is majoring in History with a focus in empires and colonialism. She grew up in the D.C. area and now lives in Indianapolis. In her free time, she interns for one of New Haven’s Alders, is Business Manager for the Yale Slavic Chorus, edits for Yale’s feminist publication Broad Recognition, and works as a Dwight Hall Urban Fellow at Loaves and Fishes, New Haven’s biggest food pantry. This summer she’s working for the Hart Island Project and the Beinecke Rare Book & Manuscript Library. 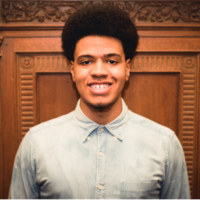 Dante de Blasio (2018)
Dante, Hopper College (‘19), is majoring in political science with a concentration in political philosophy. Dante is from Brooklyn, New York. He attended Brooklyn Technical High School where he captained his debate team. At Yale, Dante is an active member of the Afro-American Cultural Center and served as Head Peer Liaison in the 2017-18 academic year. He has also served as the treasurer for the Black Student Alliance and a student research assistant at the Yale Center for British Art. He is more than excited for this summer with CTW! 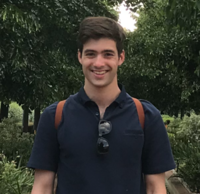 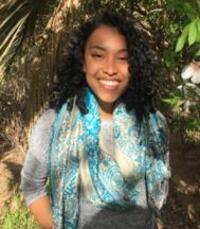 Me’Lena Laudig (2018)
Me’Lena, Yale College (‘19), is double majoring in Ethnicity, Race, and Migration and Religious Studies. She is from Amarillo, Texas, home of tumbleweeds and the occasional dust storm. At Yale she sings a capella with Shades and the senior group Whim N’ Rhythm. She is a first-year counselor and is involved in Yale’s premier Black drama group Heritage Theater Ensemble. As an Edward A. Bouchet Undergraduate Fellow, she researches the intersection of migration theory and religious thought and spent the spring of her junior year in Rabat, Morocco, studying migration and transnational identity. She is so excited to get to know the CTW students this summer and to journey with them through the college process during the school year! 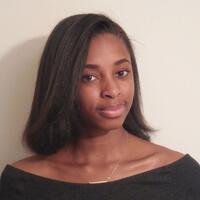 Imani Butler (2017)
Imani Butler, Yale College (‘20), grew up in New York City and attended The Birch Wathen Lenox school. At Yale, Imani spends a lot of her time as a member of two dance groups on campus, Rhythmic Blue (hip-hop) and Taps at Yale (tap dance). In addition, she is an active member of the Yale Black Women’s Coalition and will continue to serve as Publicist for the organization in the 2017-18 school year. Imani also works as a tour guide and student ambassador for Yale’s Admissions Office. She’s looking forward to two weeks of fun, learning and academic growth! 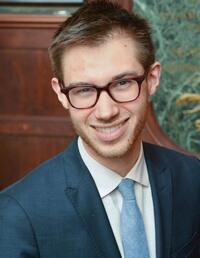 Daniel, Yale College (‘18), is majoring in history with a concentration in the American South.  He grew up in New York City, where he attended the Dalton School. At Yale, he serves as a tutor with the Yale Undergraduate Prison Project, as a Writing Partner at the Yale College Writing Center, and as a teacher with the Yale Hemispheres International Relations Program. His has written for a number of publications, including The Yale Herald, Southern Cultures, and The Nation Magazine. In spring of 2016, Daniel spent the semester in Paris, France, where he taught French and English to refugees. In his spare time, he goes for hikes and plays too much baseball (he is a die-hard Yankees fan). He cannot wait to bring his love of teaching and writing to CTW! 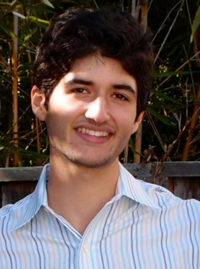 Max Norman (2017)
Max, Yale College (‘18), was born and raised in sunny Northern California, and found his way to another kind of home in the intensive track of the (comparative) Literature major. At Yale he is an active classical musician and reviews theater for the Yale Daily News. He tutors French at Yale and Latin at the High School in the Community, and has done internships at Yale University Press and the Center for British Art. He is looking forward to working with students at CTW this summer! 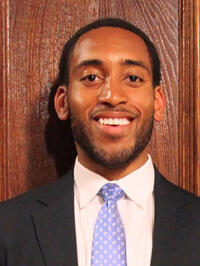 Denzell Jobson, Jonathan Edwards College (‘17), is majoring in political science with a concentration in urban studies. Denzell is from the city of Canarsie, Brooklyn, New York. He attended Brooklyn Technical High School and Saint Paul’s School in Concord, NH. At Yale, he is a sprinter for the Varsity Track and Field team and a freshman counselor in JE. He is an active member of the Yale Black Men’s Union (BMU) and served as President in the 2015-2016 academic year. He has served as both a tour guide and a student ambassador for the Admissions Office. He is more than excited for this summer with CTW!

Sophie Dillon (2016)
Sophie, Yale College (‘17), is majoring in English with a concentration in Creative Writing.
Sophie has lived in New Haven since she was two. She grew up in East Rock, attending Worthington Hooker, Wilbur Cross, and Educational Center for the Arts. At Yale she performs with Red Hot Poker (sketch comedy), the Viola Question (improvisational comedy), WORD (performance poetry), and the Yale Slam Poetry Team. She works as a Writing Partner at the Yale College Writing Center, where she tutors students one-on-one in college essay writing. As a NHPS alum and a classics student, she could not be more excited for this summer with CTW!