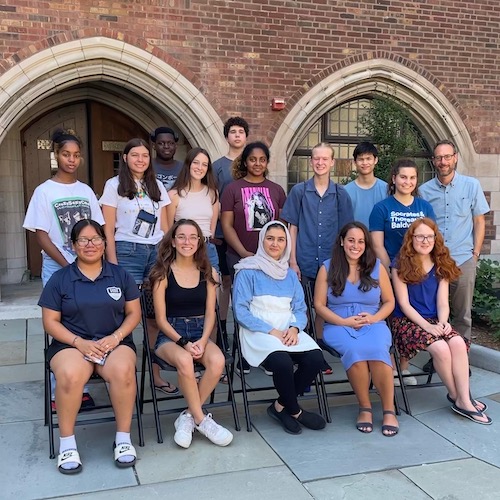 Students in this summer’s Citizens Thinkers Writers program had the opportunity to engage in open discussions with New Haven community leaders who represent a wide variety of professional fields and interests.

The students enjoyed conversations with:

Lauren Anderson, owner and founder of the “bookspace,” Possible Futures Books, a combination independent bookstore and community reading room located in Edgewood. Anderson shared how she created Possible Futures with the hopes of strengthening community connections and encouraging dialogue about important social justice issues. Students toured the bookspace which carries a collection of books by authors who have been historically underrepresented in the publishing world. During their visit, students also read and discussed excerpts of Ocativa Butler’s work and had time to browse the book selection.

Leslie Blatteau, President of the New Haven Federation of Teachers and former NHPS history teacher. As the president of NHFT, Blatteau organizes outreach to the 1800+ teachers in the district and other school-related personnel, in addition to facilitating communication between teachers, the school board, and the office of the mayor. NHFT and Blatteau advocate for policies that promote equitable public schools and high-quality public education for all students in New Haven. Students spoke with Blatteau the relationship between teaching and learning conditions and the role of teachers unions.

Isaac Bloodworth, artist and Museum Technician at the Yale Center for British Art. Born and raised in New Haven’s Edgewood neighborhood, and a graduate of New Haven public schools and the University of Connecticut’s puppet arts program, Bloodworth’s art is on display in multiple locations in and around New Haven. Students met Bloodworth at City Hall in front of one of his public murals where they discussed the intersection of race, identity, and art.

Anthony Campbell, Yale Chief of Police. Campbell is the former Chief of Police for the New Haven Police Department and a Yale alumnus who earned a bachelor’s degree from Yale College and a master’s degree from Yale Divinity School. He initially joined the Yale police as an Assistant Chief overseeing Patrol Operations, Community Engagement, and Emergency Services. Students visited the Yale Police Department and engaged in a candid conversation about policing and the relationship between New Haven and Yale.

John DeStefano, Executive Vice President of New Haven Bank, a locally owned, managed, and governed bank dedicated to serving businesses, institutions, and individuals in New Haven. DeStefano served as the 49th mayor of New Haven and also lectures in the political science department at Yale. Students spoke with DeStefano about successes and challenges of political cooperation and about economic development in New Haven.

Hossna Samadi, Program Associate, and immigrant and refugee advocate at Sanctuary Kitchen. Sanctuary Kitchen provides professional development and employment at an above-market wage for immigrants, refugees, and asylum seekers in the Greater New Haven area. Samadi resettled in New Haven in 2015 from Afghanistan. As a program associate, she manages the online sales platform by tracking the Sanctuary Kitchen budget and sales. Samadi also streamlines online platforms to ensure information is easily accessible. Students talked with Samadi about civic and cultural exchange, political sanctuary, women’s issues, and her experiences building community in New Haven.

Students also had the opportunity to meet with Michael Morand, Director of Community Engagement at the Beinecke Rare Book and Manuscript Library. Morand gathered and presented archival materials directly related to the CTW syllabus, including artifacts from Frederic Douglass, women’s suffrage, the civil rights movement, and local New Haven history.

CTW’s program guests represented a breadth of perspectives and approaches to community service, to civic engagement, and to representing and advocating for underrepresented communities in New Haven. Meeting directly with students provided a space for open exchange on a range of important and often difficult political issues central to the civic life and health of New Haven.